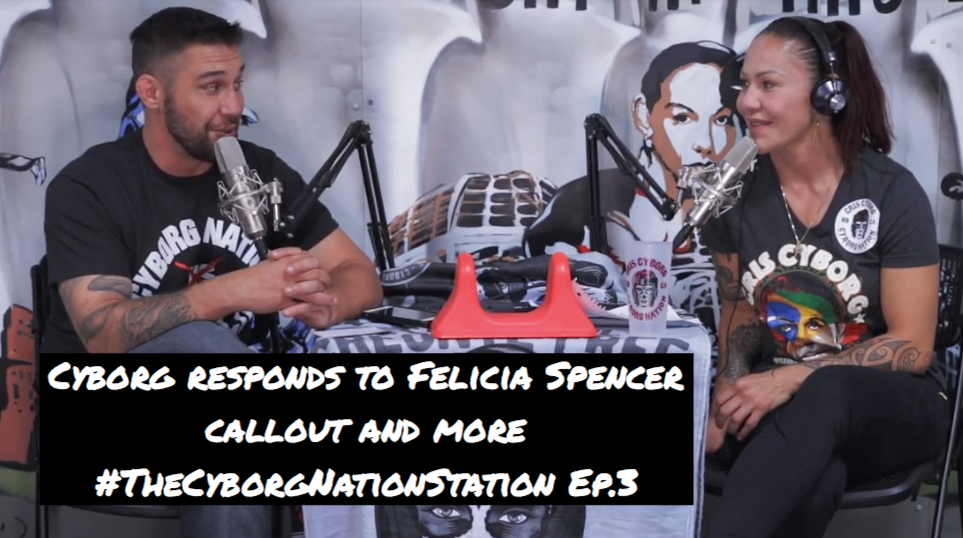 THE CYBORG NATION STATION is back, for episode 3 as Ray Elbe is joined by a special guest with Cris Cyborg herself makes an appearance as she is filling in for FanSided reporter Amy Kaplan who is currently in Asia after covering the One Championship event from Singapore last weekend.

In the latest edition of The Cyborg Nation Station we get an opportunity to ask Cris her reaction to being called out by UFC newcomer Felicia Spencer following her quick victory over Megan Anderson at UFC FN 152 in Rochester New York this weekend.  Spencer also a former Invicta FC Champion at 145lbs is now 7-0 as a professional with an amateur win over Macy Chiasson the Ultimate Fighter Featherweight season winner.

Spencer who is a Taekwon Do and BJJ Black Belt has won 4 fights by way of RNC and following her impressive performance voiced her willingness to fight Cyborg in an interview with Aaron Bronsteter.  Cyborg who’s UFC contract expires in August, immediately responded on Twitter, reminding fans that she has had 1 fight in the past 15 months, despite being healthy and ready to compete, graciously accepting the callout setting up a lineal title fight for the Invicta FC title if promoters are able to make the fight July 27th in Edmonton Canada.

What do you think Cyborg Nation? Will be see Cyborg fight the last fight on her UFC contract in Canada July 27th? Leave your comments below.