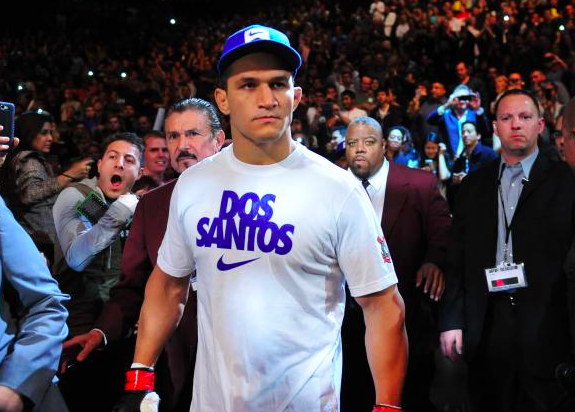 Recently cleared by USADA of any wrong doing, former UFC Champion Junior Dos Santos will look to get back to his championship form with a fight against newly signed UFC Heavyweight Blagoy Ivanov who will be making his promotional debut after capturing the World Series Of Fighting WSOF heavyweight championship belt.

JDS who last fought UFC Champion Stipe Miocic at UFC 211 suffering a TKO loss in the first round will be looking to make his first fight in over a year.  Prior to that Junior Dos Santos was able to secure a decision victory over Ben Rothwell who is currently suspended by USADA for a doping violation.

Blagoy Ivanov is from Bulgaria and was WSOF Heavyweight Champion has a 16-1 record with his only defeat coming to current heavyweight contender Alexander Volkov when the two prospect where fighting for Bellator in 2014.  Ivanov has impressive wins over Lavar Johnson,Ricco Rodriguez, Zak Jensen, Kazuyuki Fujita, and Shawn Jordan

According to Brett Okamoto the fight will take place July 14th in Boise Idaho, and event that already has a return of Cat Zingano Vs Marion Reneau on the fight cards