Tony Ferguson shares his knee after surgery and it looks painful 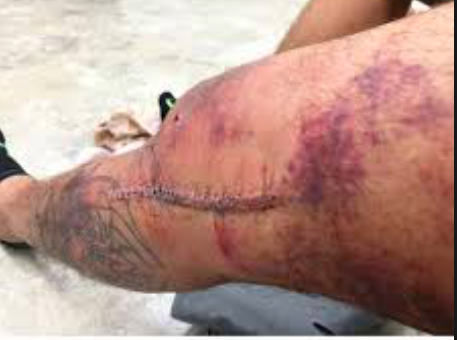 Tony Ferguson was forced out of UFC 223 and his fight with Khabib Nurmagomedov after he tripped on a wire during a walk in the back of a recording studio while conducting interviews.  The injury was substantial and while Ferguson wanted to fight on the injury, his team wouldn’t allow him.

Ferguson had surgery last week to repair the damaged ligaments and the scar is NARLY! Hopefully the surgery was a success and there will be no more complications with the knee.  It is unknown how long Tony Ferguson could be sidelined with the injury, however it is believed it will be several months of rehab before he will even be able to begin soft training.

During the winning moments of Khabib Nurmagomedov’s victory, it became officially KHABIB TIME when he became the Undisputed world Champion at 155lbs, despite Tony Ferguson being Interim Champion, the title was stripped from him.