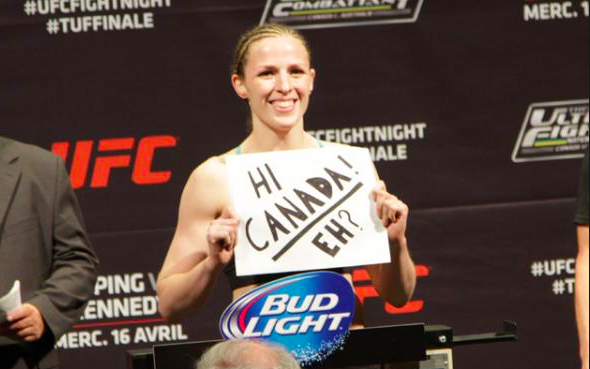 With news that Wrestling Olympic Silver medalist Sara McMann is pregnant, the already weekend UFC Bantamweight has suffered another withdrawal from a top ranked fighter.  While Holm is fighting at Featherweight, Juliana Pena on maternity leave, and Valentina Shevchenko dropping to the flyweight division, the bantamweight class has seen it’s ranks depleted.

Congrats on the pregnancy news @Sara_McMann! That does leave 1 more 135er on the sidelines though …@ufc @Mickmaynard2 ‘m ready and available to put on a killer show

Kaufman at only 32 years of age has a professional MMA record of 20 wins and only 4 defeats. Kaufman’s losses have come to Valentina Shevchenko by split decision, a rematch to Alexis Davis after twice previously, and former world champions Marloes Coenen and Ronda Rousey. A veteran of professional MMA since 2006, Sarah Kaufman is a popular athlete in her native country of Canada.