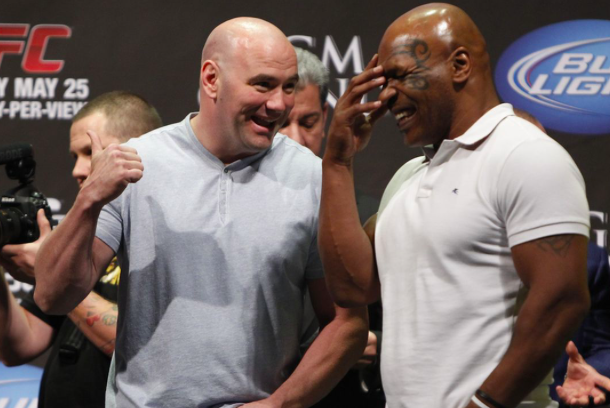 Former UFC Champion and current Hall of Fame Fighter Tito Ortiz was recently on the BITTHEMIC podcast, which is former Boxing Heavyweight World Champion Mike Tyson’s podcast.  The question was asked to Mike Tyson, who was cage side at Cris Cyborg’s UFC 222 victory over Yana Kunitskaya who he thought would win a fight between Cris Cyborg and Amanda Nunes.

Mike Tyson went on to say that he would love to see the fight, and that Cyborg would most likely win the fight in a competitive bout.  Currently Amanda Nunes is scheduled to fight Raquel Pennington at UFC 224 which is going down in Brazil.

Cyborg had issued a date of July 7th for UFC 226, however the UFC booked Nunes for the Rio event, and subsequently booked Megan Anderson Vs Holly Holm for UFC 225, which has put Cris in a position for UFC 226 where they are wanting her to train without an opponent or guarantee of competition on that date.  At this time it is unknown if fans will be given the Amanda Nunes fight at UFC 226, however it is looking less and less likely.