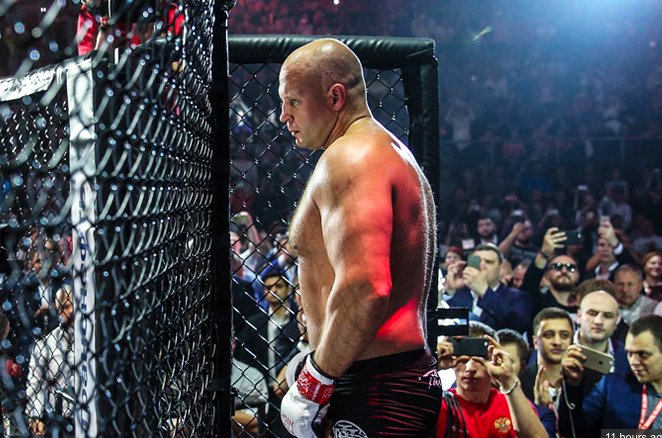 Bellator 198 was a huge event for Bellator MMA and the expectancies did not disappoint as the main event saw former PRIDE FC champion Fedor Emelianenko face former UFC Champion Frank Mir in a guaranteed firecracker of a main event.

Winning in the first round, Fedor Emelianenko  will now face Chael Sonnen in the next round of the Bellator MMA Heavyweight Grand Prix. Chael Sonnen won a decision over Rampage Quentin Jackson to advance.

The opening round was all this fight between Fedor and Mir required as Mir came out and rocked Fedor early with heavy punches before Fedor was able to toss him with a traditional Judo throw.  Mir scrambled back to his feet while Fedor greeted him with crushing knees for his effort.  During a quick exchange Fedor hurts mir and hits him with a short uppercut to send Mir to the mats.

Fedor continues the onslaught and the ref stops the fight at 48 seconds of the first round.

Fedor ENDS Frank Mir with brutal strikes in round 1 at #Bellator198 !!pic.twitter.com/2seZ6Oq1NP