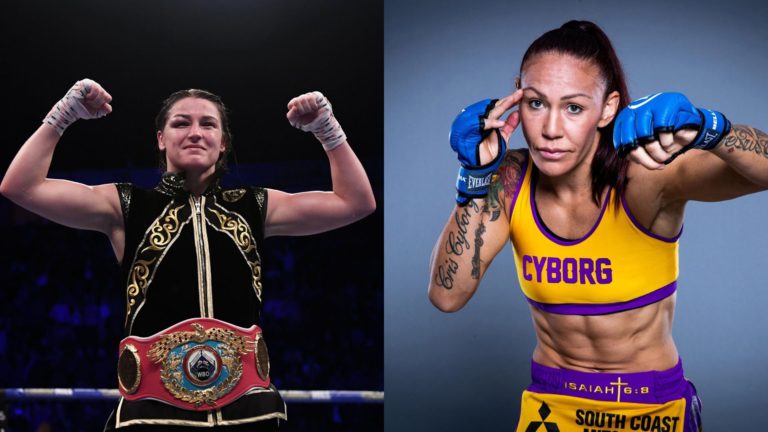 During the most recent #TheCatchUp between Cris Cyborg and Canadian MMA reporter James Lynch, Cyborg took a couple of moments to respond to the remarks by Boxing promoter Eddie Hearn that his fighter Katie Taylor would like to fight Cris Cyborg in a cross over matchup.  Katie Taylor is a 34 year old Irish boxer who currently is a two weight world champion and undisputed lightweight world champion having held the WBA title since 2017, IBF title since 2018 and the WBC, WBO and Ring Magazine titles since 2019.

Following her controversial victory over Delfine Person she became only the 7th fighter in history to hold all four major world championships–WBA, WBC,IBF, and WBO at the same time joining Bernard Hopkins, Jermain Taylor, Cecilia Braekhus, Terence Crawford, Oleksandr Usyk, and Claressa Shields as the only fighters to ever achieve that feat. Boxing Rec currently has Katie Taylor ranked as the #1 Pound 4 Pound female boxer in the world.

Cyborg who is currently licensed as a professional boxer in California despite only have Muay Thai and MMA experience is considered the greatest female featherweight of all time, being the only fighter to capture every championship in their weight category–winning the Strikeforce, Invicta, UFC, and Bellator MMA Championships at the 145lbs Mixed Martial Arts weight category of Featherweight.

Playfully responding to Eddie Hearn of Matchroom Boxing, Cyborg asked if it would be a Pillow Fight, Water Fight, or Food Fight–before explaining she knows Katie Taylor’s promoter Eddie Hearn will not be willing to match his star fighter in a Mixed Martial Arts MMA style fight, however Cyborg left the possibility open for a matchup–even offering to fight on a rumored Conor McGregor Vs Manny Pacquiao fight if it was to take place in Ireland.